Vaughan Jones is an English violinist dedicated to exploring lesser-known gems of the violin repertoire which have largely been overlooked by more established artists.

Vaughan started learning the violin at the age of 8. Between the ages of 10 and 16 he was guided by David Gregory before attaining a Music Scholarship to Charterhouse School. This led to studies at the Birmingham Conservatoire and the Royal College of Music. Over the last decade he has benefited from the wisdom and insight of the renowned Hungarian teacher Kató Havas O.B.E..

Vaughan spent many years as a freelance violinist in and around London, leading to work with several major orchestras, including the Philharmonia and London Philharmonic Orchestras. As an orchestral musician he played under such conductors as Sir Simon Rattle, Pierre Boulez, Gennadi Rhozdestvensky, Valery Gergiev and Yehudi Menuhin.

He now focuses on chamber music and the exploration of lesser-known repertoire by composers such as Johann Joseph Vilsmayr, Alessandro Rolla, Louis Spohr, Johann Wenzel Kalliwoda and Benjamin Godard amongst others.

In 2008 Vaughan (along with his regular duo partner Reiad Chibah) released the first of his forays into the ​lesser known repertoire, choosing three neglected gems by the composers Louis Spohr, Alessandro Rolla and Johann Wenzel Kalliwoda. The ensuing CD entitled ‘Spohr, Rolla, Kalliwoda Works For Violin & Viola’ is available to purchase on our Classical CD Shop Page.

In 2014 he released a disc called ‘The Hidden Violin’ (First Hand Records 29) which included premiere recordings of Benjamin Godard‚’ two Solo Violin Sonatas as well as Christian Sinding’, ‘Chaconne’. The Strad magazine wrote ‘Vaughan Jones plays all these pieces with unfailing technical command and interpretative clear-sightedness’ and the Gramophone magazine  added ‘a memoir of a fading repertoire, placed down with great care by technically pristine playing.’

This was followed in 2015 by a 2-Cd set of the first complete recordings of the Six Partitas for Solo Violin by the Salzburg composer Johann Joseph Vilsmayr (1663 – 1722) which has been selected by the Gramophone magazine as an Editor’s Choice recording for February 2016. Charlotte Gardner wrote:

‘Yes, it’s obscure repertoire once more; but this is music that demands our full attention, presented in such a manner as to ensure that it gets it. The take-home point is simply that they’re intensely beautiful works that constantly tickle the ear with fresh moods, styles and effects as they dance along. Add the immaculate technical precision and immense musicality of Jones’s playing, set it all within the subtly ample acoustic of the church of St Mary Magdalene in Willen, Buckinghamshire, and you have something of a recording triumph which the programme’s other two works only build upon. First, Pisendel’s Sonata in A minor. Then, to finish, a story: Biber’s The Guardian Angel Sonata, No 16 from the Mystery Sonatas, played with a purity, profundity and sense of dramatic architecture that truly stops you in your tracks. Really, bravo.’

Back in 2001, Vaughan played on ‘‘The Lord of the Rings – Fellowship of the Ring’ movie soundtrack, as a member of the London Philharmonic Orchestra under the baton of the film’s composer Howard Shore. Some of the music recorded ended up being subsequently used for the film ‘The Hobbit: An Unexpected Journey’. Vaughan also arranged and performed on the soundtrack for the forthcoming biopic of Gertrude Bell entitled The Queen of the Desert, directed by Werner Herzog and featuring Nicole Kidman in the leading role. He was also asked to appear in the ballroom scene as one of the palm-court string ensemble!

Vaughan plays on two violins (one made in 2007 and the other in 2011) by the luthier Martin McClean from Moneymore, Ireland. The 2007 violin is sweet-toned and beautifully pliant, capable of a rich palette of different sounds; whereas the 2011 one is fiery and gutsy, with a great ability to project. He feels fortunate in having crossed paths with such a gifted luthier as Martin. 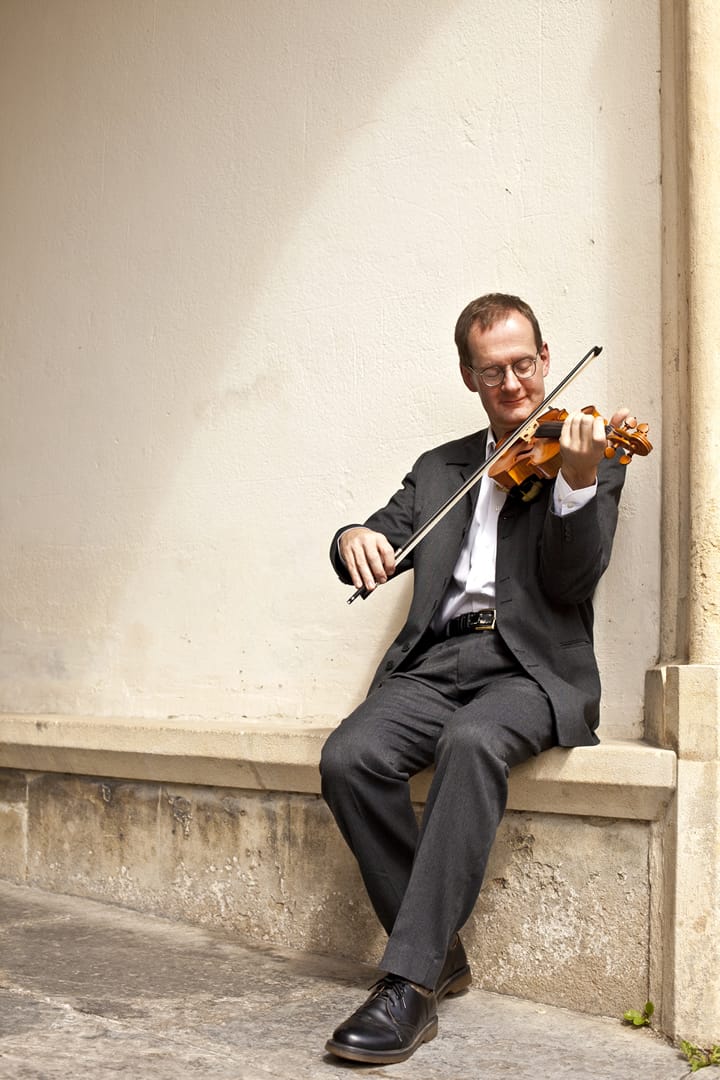